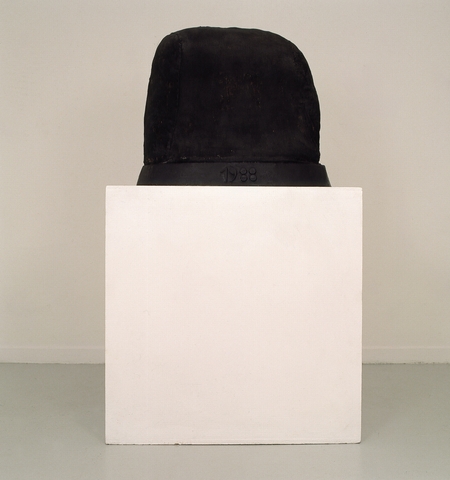 The artist Thierry De Cordier is impossible to categorise. He makes paintings, sculptures and installations and is also a poet and philosopher. The substance of his oeuvre shines through in one work after another and in several media. He cherishes the notion of a romantic artisthood in which the artist discovers the world and seeks ideals and solutions. In his case, life and art thus coincide. At the heart of his oeuvre is man, his flight from the world, his solitude, his hope for answers and his limitations. This certainly applies to Head Breaker. It is a sculpture that is hard to describe in figurative terms.

It looks like a torso, with no head or clear orientation. Its colour is dark, black. This and other dark colours constantly recur in his work and they are intended to show ‘Weltschmerz’, the feeling of profound sorrow resulting from the imperfection of the world. De Cordier sees this work, by its own imperfection, as symbolising our aimlessness and faulty communication. At the same time, in this work he offers a playful solution to our existential torment. It can be used, for example, to bang one’s head against, leading ultimately to unconsciousness, in which state one no longer has to think and search. There is another possible interaction, a gentler one: you can rest your head here and realise that you gain nothing by breaking your head, you have to accept your fate.